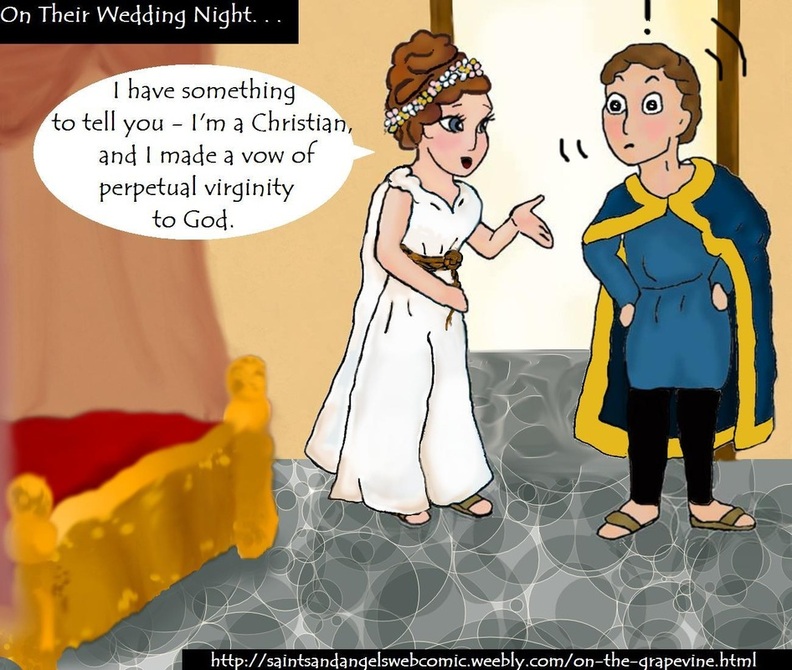 Saint Cecilia lived during a time when people were killed for being Christian. Her nursemaid was secretly a Christian, and taught St. Cecilia. St. Cecilia vowed to give her life to God as a virgin, but her parents arranged for her marriage to a young noble named Valerian. St. Cecilia sang love songs from her heart on her wedding day,  but they were to the Lord. That night, she revealed to Valerian that she was a Christian and a vowed virgin. She told him that her Guardian Angel was standing by her with a flaming sword and that he'd better not touch her.  Then she spent the whole night converting him. What a surprise for a wedding night!

St. Cecilia was very holy and had a close relationship with her Guardian Angel and her husband. However, it was discovered that they were Christians, and Valerian and his brother were martyred. The Roman Court was hesitant to kill Cecilia because she was from a wealthier, nobler family. They decided instead to make an example of her.  However, they were in for a battle from the beginning. When they called her before the court and asked her to state her name, she answered - "Cecilia, but my most beloved name is Christian."  Her responses turned the hearts of many, and after she left, they decided it was because of her beauty. So they had her face severely scarred, but it miraculously healed overnight. She was sentenced to death. They tried to put her to death by suffocation in a heated bath, but her Guardian Angel kept the air around her cool and pure. Then they tried to chop off her head, but her neck became like a tree trunk. She was left to bleed to death for three days from the gashes, and spent the whole time witnessing to the love of God. She left her home to the Church.

Her body was found incorrupt in 821 AD. She is the patron saint of music.

You can read more about her HERE.
Powered by