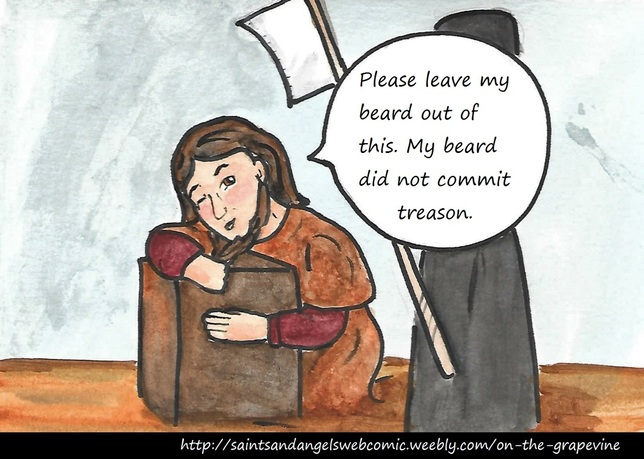 St. Thomas More (1478-1535) was a scholar who studied law at Oxford. He used to join the monks at a nearby Carthusian Monastery during their spiritual exercises, and once considered becoming a monk. Instead, he continued ascetical practices but remained a layman, entered Parliament, married good-natured Jane Colt and had four children. After her death, he married widow Alice Middleton.  In 1516 he wrote "Utopia," a reknowned book about an ideal society.

Thomas More quickly rose in prominence, and King Henry VIII made him Lord Chancellor. Thomas resigned when King Henry demanded an annulment of his marriage to Catherine and denied Papal supremacy. He was tried and convicted of high treason for not recognizing the king as head of the Church, and was sentenced to death by beheading.

When he lay his head on the chopping block, St. Thomas More carefully moved his beard out of the way. "My beard," he told the executioner, "hath not committed treason." Right before he was beheaded, he declared himself "the king's good servant, but God's first."

He is the patron saint of lawyers. You can see our other St. Thomas More comic HERE, or read more about him HERE.

Give me the grace, Good Lord
To set the world at naught.
To set the mind firmly on You and not to hang upon the words of men's mouths.

To be content to be solitary.
Not to long for worldly pleasures.
Little by little utterly to cast off the world and rid my mind of all its business.

Not to long to hear of earthly things, but that the hearing of worldly fancies may be displeasing to me.
Gladly to be thinking of God, piteously to call for His help.
To lean into the comfort of God.
Busily to labor to love Him.

To know my own vileness and wretchedness.
To humble myself under the mighty hand of God.
To bewail my sins and, for the purging of them, patiently to suffer adversity.

Gladly to bear my purgatory here.
To be joyful in tribulations.
To walk the narrow way that leads to life.

To have the last thing in remembrance.
To have ever before my eyes my death that is ever at hand.
To make death no stranger to me.
To foresee and consider the everlasting fire of Hell.
To pray for pardon before the judge comes.

To have continually in mind the passion that Christ suffered for me.
For His benefits unceasingly to give Him thanks.

To buy the time again that I have lost.
To abstain from vain conversations.
To shun foolish mirth and gladness.
To cut off unnecessary recreations.

Of worldly substance, friends, liberty, life and all, to set the loss at naught, for the winning of Christ.
To think my worst enemies my best friends, for the brethren of Joseph could never have done him so much good with their love and favor as they did him with their malice and hatred.
These minds are more to be desired of every man than all the treasures of all the princes and kings, Christian and heathen, were it gathered and laid together all in one heap.
Amen.