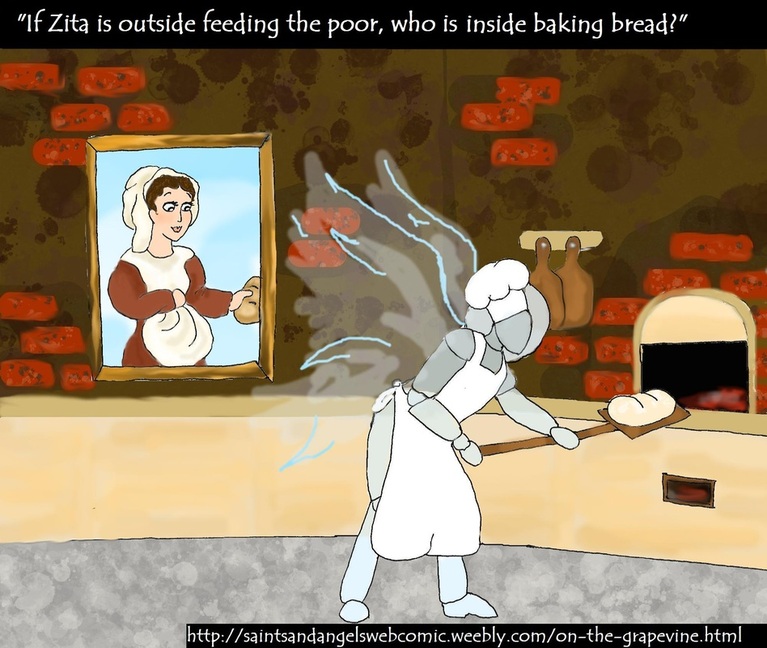 St. Zita (1212 - 1272) came from a poor, devout Italian family. She was twelve when she started as a housekeeper for the family of a rich weaver, and kept the job for the rest of her life. She woke in the middle of the night to say her lengthy prayers and rose early every morning to go to daily mass, then went about her household duties so diligently and perfectly that the other servants became embittered towards her. She was very generous to the poor, even giving away her employers' excess food. At first they were upset about it, but she won them over. She visited the sick and those in prison, and often said that devotion is false if it is slothful.

As the story goes, the other servants saw her outside giving food to the poor when she was supposed to be baking bread, and hurried to tell the family they worked for about it. When the family came into the kitchen, however, they found angels baking the bread for Zita.

St. Zita was exhumed 300 years after her death and found incorrupt, but has since mummified. St. Zita is the patron saint of maids and domestic servants, and is often prayed to for help finding lost keys. You can read more about her HERE.

Heavenly Redeemer,
may we seek to serve You as St. Zita did,
through service to her brothers and sisters on earth.
We pray that we do not despise authority
but in humility and love,
seek to do Your Will by serving others.
Amen.
Powered by