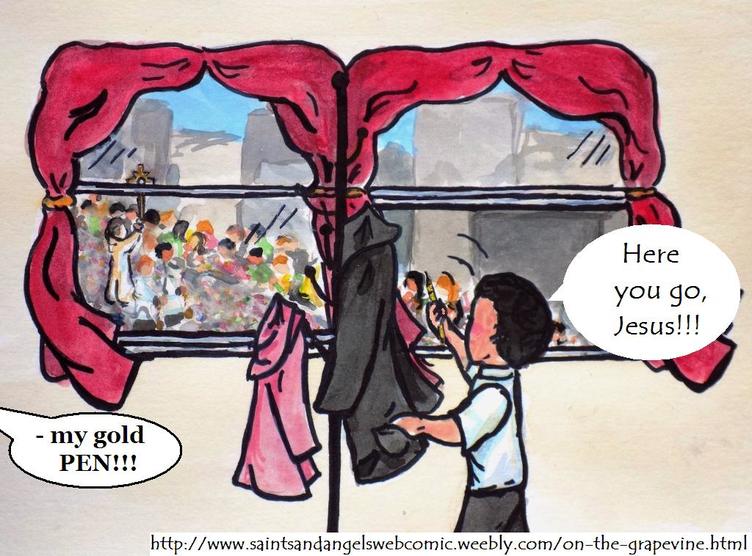 Pier Giorgio came from a wealthy, powerful Italian family. His family was lukewarm in their faith, but he had a great love of God. When he was a young boy, an Eucharistic procession passed by. Seeing all of the people kneeling and scattering flower petals at Christ's feet, he was overcome with love of God and searched for something he, too, could offer. He grabbed his uncle's fancy, expensive gold pen out of his coat pocket and threw it out the window and onto the street below!

Blessed Pier Giorgio grew up to be an affable, popular, athletic, generous, handsome and very kind young man. He had two great devotions - to the Eucharist and to our Blessed Mother. He gave all that he could to the poor and the needy, always practicing fraternal charity. He brought his numerous friends to Adoration and Mass on a regular basis, and loved to spend time in the mountains. He also hid many of his good works and avoided drawing attention to his needs. He wanted to become a religious, but his parents rejected the idea, and so he was obedient and simply became a 3rd order (lay) Dominican. Later, when he considered marrying a young lady, his parents again objected, and again Pier Giogio submitted. When he received news that his parents planned to divorce, he prayed to God that they might stay together - even if it be at the cost of his own life. Shortly after he contracted poliomyelitis. He gave his medicine to another sick, poor man, and died very shortly after being diagnosed. After his death, many of his good works and evidences of his holiness came to light. His parents' marriage was saved. Pier Giorgio was 24 years old when he died on July 4, 1925.

His body was exhumed and found perfectly preserved and incorrupt in 1981, and transferred to the cathedral in Turin. Pope John Paul II beatified Pier Giorgio Frassati on May 20, 1990, calling him the “Man of the Eight Beatitudes.”

Many people pilgrimage to the tomb of Blessed Pier Giorgio, especially students and young people who seek courage to follow his example. You can read more about him HERE.

﻿"O merciful God,
Who through the perils of the world
deigned to preserve by Your grace Your
servant Pier Giorgio Frassati pure of heart
and ardent of charity, listen, we ask You,
to our prayers and, if it is in Your designs
that he be glorified by the Church,
show us Your will, granting us the graces
we ask of You, through his intercession,
by the merits of Jesus Christ, Our Lord. Amen."
IMPRIMATUR, 1932
+Maurillo, Archbishop of Turin