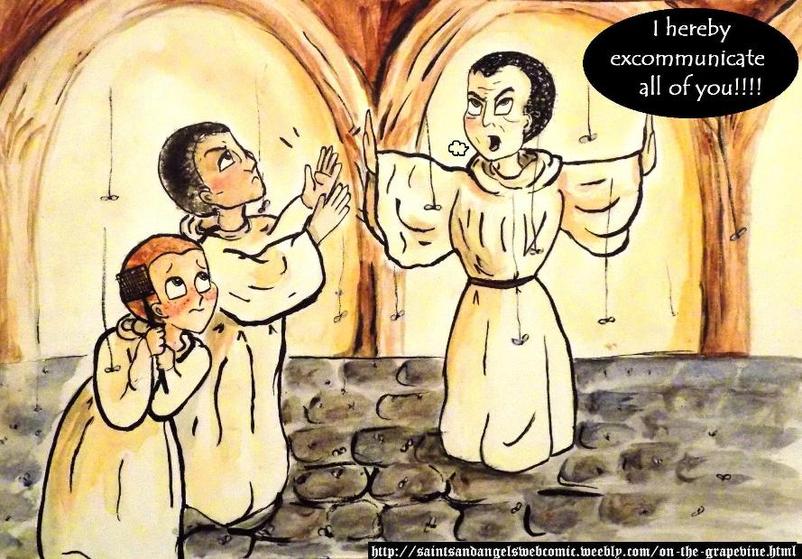 As the Cistercian monks prepared to open a new abbey, they found a huge swarm of flies filling the church about to be dedicated. The monks swatted and shooed to no success. Finally, the exasperated St. Bernard solemnly declared to the flies, "I hereby excommunicate all of you." They laughed together about it, but the next morning found hundreds of dead flies.

St. Bernard came from a faithful, noble French family in the 12th century and went to college at an early age. There he studied Theology and Holy Scripture and was known for his piety and recollection. His mother died, and soon afterwards he joined the Cistercians. Bernard made his profession after a fervent year in the novitiate. Within 3 years of entry he was sent with 12 monks to form a new Monastery - the Abbey of Clairvaux - and immediately appointed abbot. Bernard got to work founding numerous other monasteries. His reputation for holiness spread and he was offered several bishoprics - but turned them down. He advised popes, preached the second crusade, and was famed for his many miracles. St. Bernard had a special devotion to Mary, Lectio Divina style prayer, and the contemplation of Holy Scripture in general. He was the one who composed the famous prayer to Mary known as the Memorare, and is a Doctor of the Church. You can read more about him HERE.

-Meg
The Memorare
Remember, O most gracious Virgin Mary,
that never was it known that anyone who fled to thy protection,
implored thy help,
or sought thy intercession was left unaided.
Inspired with this confidence,
I fly to thee, O Virgin of virgins, my Mother;
to thee do I come;
before thee I stand, sinful and sorrowful.
O Mother of the Word Incarnate,
despise not my petitions,
but in thy mercy hear and answer me. Amen.
-St. Bernard of Clairvaux