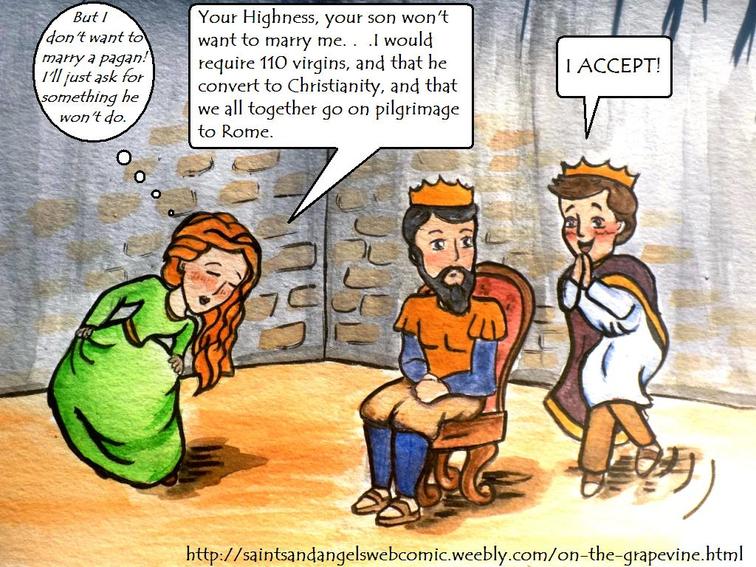 The story of St. Ursula varies from source to source, and is sometimes dismissed as a misunderstanding. According to one source, Ursula was a holy, generous, virtuous and beautiful young maiden. She caught the attention of the King, who wanted her to marry his son. She did not want to marry a pagan, and so she set demands that she believed would be rejected as a prerequisite to marriage. These demands included his conversion to Christianity, 110 virgins, and a pilgrimage to Rome. However, the prince was so impressed by her goodness and virtue that he accepted!

In another version, she was herself the daughter of a king, and was granted a 3 year postponement on her marriage to a pagan king wherein she could take a trip to Rome with 11,000 virgins.

In both versions of the story, she and the virgins were intercepted in Cologne on their way back by Huns. The virgins were all martyred. The chieftain wanted Ursula for his wife, but she refused him, and so she too was martyred.

The Virgin Islands were named after Ursula and her companions, and St. Hildegard of Bingen wrote many chants in her honor.  You can read more about her HERE.

Saint Ursula,
You had the courage and leadership to gather others to yourself
and unite them in love and discipleship
to Jesus our Lord and Savior.

Like you, may we be witnesses of prayer and devotion to Christ;
of Christian service and unity in discipleship.
​
When we encounter resentment and ill will,
May we meet it with courage and unswerving faith.
Together may we honor and serve the Christ for whom you died
and for whom we live.
Intercede for us to Jesus whom we all love.
Amen