St. Teresa of the Andes 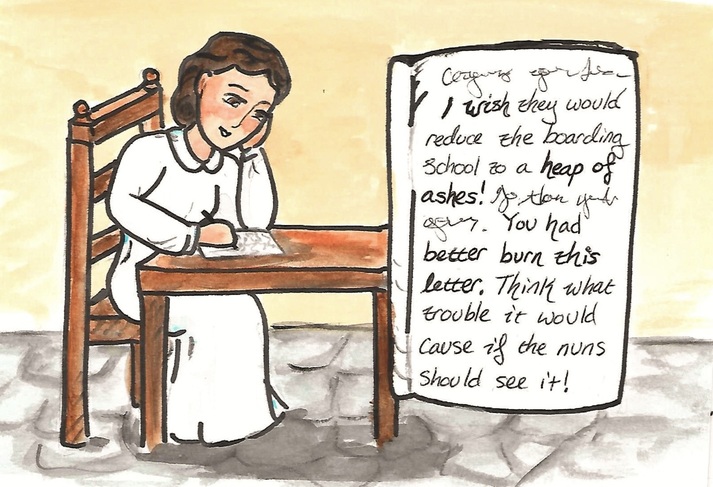 St. Teresa of the Andes was a Chilean, and quite a spitfire! She was born on July 13th, 1900, and named Juanita at birth. Juanita was very active, and often scolded by her mother for playing with the boys too much. She also had a temper, was conceited, sometimes threw crying fits, and hated to obey. She loved horseback riding. However, she was deeply impressed by the love and the vastness of God from an early age. An earthquake led her to begin turning to Jesus more, and then she made a promise with her brother to pray the rosary every day - a promise she only broke once.  She rapidly began to grow closer to Christ, and continually fought herself - giving into a bad temper, and then deeply regretting it.  She read Therese's Story of a Soul, which inspired her. Juanita then took very ill for several years. Towards the end of the illness, she felt strongly that God was calling her to be a Carmelite.

Juanita began trying to do all things to prove her love for Christ - taking courses she did not like at school, and working hard at them to please Him. Making little sacrifices during the day. She became familiar with and found a kindred spirit in the writings of Blessed Elizabeth of the Trinity. Juanita had a special love for children, particularly the poor, handicapped and less gifted. During the summers, she taught at the family's mission, and had a gift for helping the children understand the faith. She developed a love of swimming and tennis, but most especially loved the mountains and the sea, loving in them the vastness and love of the God who created them and held them in existence for her.

When she was 18, she finally entered Carmel. She followed the rule with deep love and humility, and was given special permission to write many letters. About 6 months after she moved from postulant to novice and received the habit and the name Teresa, she took very ill with typhus. Through her sickness and fever, she spent many hours in prayer. Teresa died when she was 19, and is the patron saint of young people. She is also the patron saint of the Carmelite Monastery that I am going to join!

You can read more about her HERE.

Novena Prayer to St. Teresa of the Andes

Lord Jesus, you chose St Teresa of Los Andes
to show people the joy of knowing and loving you.
She consecrated her life to your love
and reflected in her countenance the beauty of your divine Face.
You also asked her to spread the joyful message of the Gospel
and she spent her young life living the Gospel of love.
We ask you, Lord,
that her canonization by the Church may serve to exalt your name
and to bring her message of faith and love, of joy and hope, to everyone,
especially those most in need.
We also ask you to grant us the particular grace we now pray for through her intercession.

Our Father, Hail Mary, Glory be to the Father...